IV. Toys For The Boys 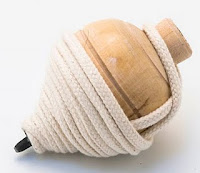 
Levon Helm and The RCO All Stars

Today I shall talk about toys, the reason being everyone of us was a child, and in some ways still is. Toys have a strong influence in how we perceive the world and that influence permeates all levels of thinking within a scientific brain and becomes ingrained, after some “discoveries” in Human culture. That in turn starts influencing a new set of thinkers in a perpetual feedback.


If we go back to the beginning of the XX century, when most of Science we are using today was formalised, we can see influence of toys and child formative years everywhere especially in the original attempts to design the atom. Remember the atom of Thomson, a metaphor of his love and experience of tasting scones? Then we go to Rutherford with a combination of marbles and Argentinean boleadors. Marbles have played an enormous role in explaining the world. Had they not existed you can be sure our Science would have been completely different. One final note… Pauli’s spin theory to explain the presence of 2 electrons in the same orbital nowadays ingrained in all the particles and sub-particles in the Atom Standard Model. I bet he threw a lot of spinning tops when he was a child. The importance of Meccano is fundamental; without it the atom would still be perceived as a marble today, none of these different sub-particles would have surfaced in people’s imagination.


Science is full of this imagery… who has never heard of the “building blocks” of the Universe or Life or Body or… They are everywhere these building blocks, but only because a lot of children, me included, played with LEGO in the 60’s. On another practical note without LEGO, IKEA flat packed furniture would have never become a thriving industry. It does not impede me, however, every time I see a “Science” program and the resident “scientist” utter the words “building blocks”, to try and punch him in the face if I could.


I am still intrigued with one thing… what toy generated “string” theory?


What troubles me is that, recently, toys are becoming non-existent. This will bring dire consequences to the progress of Science. What imagery are today’s children going to relate to when they grow up and try to explain the world? Nintendo, Great Theft Auto, iPhone, apps, Wii… there is nothing there, an authentic void of intellectual prowess and physical skill.


So Science is in its last legs. Scientists are still playing with toys, replicating their infantile dreams, their imagery, destroying to put pieces together, making incorrect assumptions, designing experiments of Wonderland worlds.


Have you ever thought of the world of atom sub-particles? hundreds of them, all catalogued, detected in “experiments”, but ultimately fundamentally flawed. It goes like this…the atom/proton/neutron is a marble (see marbles again!!) and the only way to see what’s inside is to crash one against the other. Then surprise, surprise all these crashes generate a lot of particles. No… wrong, a crash generates debris, just that. It is like trying to understand steam power and the rail industry by analysing the charred and twisted metal pieces of the crash below if the locomotives could travel at 1,000 Km/h.


To finalise whatever comes from the Large Hadron Collider (now that’s a big toy!!!) will suffer from the same flawed thinking.


In the next posts I will present my world. Surely I played with toys, I still do and ever so often I will resource to imagery to explain what I want to convey. My apologies in advance.
Labels: atom block debris IKEA Large Hadron Collider LEGO marble Meccano Pauli Rutherford Standard Model