So far I have been talking about Science and mentioning its inability to explain Everything. The Universe Standard Model (you can read at the bottom of the link four bulleted questions with no answers with many more still…) is full of contradictions and black holes (pun intended) and it is an extremely unsatisfactory explanation for the World we live in, a feeling that is shared by a growing part of the scientific community.

If you read my previous “episodes” (which I advise you to), you have already a clear view of my thoughts regarding how Science works today. I could carry on with a bit more sarcasm and attempts to wit, but that is not the purpose of this blog. I intend to explain Everything and with a bit of perseverance (from my part and yours) I shall do exactly so.

I have described previously on “Power Tools” how three fundamental equations are the basis to understand the Universe. They are not separate from each other and do not refer to different phenomena. They are intertwined and ultimately, in my gut feeling, they can be merged into a single one. The Quantum world, the Universe and Statistics have the same roots if we can start from the beginning and not get tricked by the quotidian.

I have also explained how Everything is made of Light (or photons), how easy it is to make Light and how impossible it is to make Matter. On the same breath I also said that photons (or Light) are bubble like particles with a radius and infinitesimal thickness. This fundamental concept can be extended to every sort of propagation and radiation.

I mentioned too how important and essential the word “when” is to explain the Universe and I shall immerse myself into the riddle of Time already on this post.

That’s a good start I would say. But I shall carry on. First I shall ignore that Matter exists, or Energy, that there are (aren’t) 12 or 16 or 42 fundamental particles, no Mass, no Gravity. They are not needed! I shall assume that everything that comes to our senses, we see, hear, taste, touch or feel is for the time being an illusion. So, let us concentrate on the poor relative of Particle Physics, the one that gave Einstein a Nobel Prize, the photon — Light. Take a long breath; we are diving a little bit deeper.
…………………………………….
It is vox populi that Einstein arrived to the concept of Relativity by thinking that if he was “riding a ray of light”, he would not see another ray of light “stopped” frozen by his side were they travelling in the same direction. The illusion you feel when you are on a train and think that the other train travelling on the same direction is stopped as the relative speeds are the same could not be applied. Einstein stated that the other ray of light would still pass by him with the speed of light even if he was going that fast.

This is all very lovely, this riding of rays of light ultimately created an entire new theory and changed the modern world forever, leading into new thoughts and concepts including:
Time slowing down, objects getting heavier and shorter, all this has spanned a billion books, scientific papers, experiments, discussions…

We both went round the Universe and back and nothing moved… not a tick. No time at all. Time stood still for Albert and I.

However, as miser terrestrials, if we were observing photons Albert and Paulo going on their round trip, according to today’s theories, the Universe would have ended a long time ago before they would meet again.

This is the most important property of Light. Time stands still. A photon has no Past, no Present, no Future, no Matter, no Space, it is Nothing and Eternity at the same time (and I use the word time here with enormous reservations).

This leads to the following:

Postulate 1 — Photons have a time signature, a date of Creation
Postulate 2 — No two photons have the same time signature
(Postulate 1 and 2 can be extended to include Matter particles including protons, neutrons etc.)
Postulate 3 — from Postulate 2 time is discreet and it is the minimum infinitesimal interval between each consecutive Creation.
Postulate 4 — The minimum infinitesimal interval is not constant. The Universe is discreet i. e. not isotropic.

There are some images taken by the Hubble telescope of galaxies that are 13.2 billion light years away. Astrophysicists convince us that the further we go into observing the Universe, the further back in time we can travel, getting closer and closer to the cataclysmic event of the Big Bang. 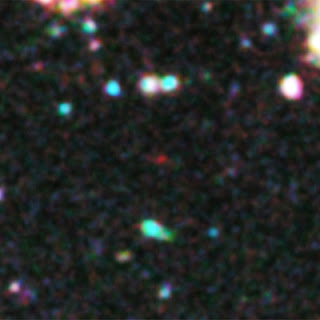 Photons from this distant galaxy (that little red dot in the middle) took 13.2 billion years to reach us. If we could look at their “wristwatch” they would show a date that far back, however from their point of view, it took no time at all to reach us, to “D”OA (“die” on arrival) at the Hubble’s detector.

Take note of this. Without these properties the Universe could not have come to existence. Two photons with the same time signature would suffice to collapse the entire Universe as this would stop the flow of Time and therefore Matter could not have been created, "darkness would have been forever upon the face of the deep".

Now... there is Nothing to start with. No vacuum, no dimension, no particles, no Time, no Energy, no Gravity, you get the gist... All is quiet... Suddenly the first photon surged, a flicker of a micro-switch... (why? because it could) nowhere to go, timeless, adimensional. Its time signature? 0.00000..... For all we know it might still be out there. It waited, and waited... for the second photon to arrive. Then... Creation began.

I could carry on now but “this margin is too narrow”. I shall go and fetch more paper.
Labels: bubbles clock creation dark matter energy gravity nothing photon space Standard Model time time signature USM