Two possibilities exist: Either we are alone in the Universe or we are not. Both are equally terrifying.
Arthur C. Clarke

Pierre Curie woke up in the morning of 19 April 1906 as he did every single day. He didn't know that a few hours later, on his way to work, he would slip and fall on the wet cobbled surface of Paris's Rue Dauphine.  His skull would be fractured by a fast passing heavy horse drawn cart, and he would die instantly at 46 years of age. And so, three years after winning the 1903 Physics Nobel Prize, the discoverer of piezo-electricity and crystal oscillation, which are used in every electronic appliance today, from a smart phone to an Airbus A380, not forgetting the small "matter" of radioactivity (with his wife Marie), stopped thinking forever in a brutal way. No one knew what he was thinking that morning, no one will ever know what his special mind could have kept on thinking, what curtailed new perspectives of the world he would have found on his laboratory, or over a coffee in a bistrot in Boulevard St. Germain. The loss to mankind is at the same time infinite and null, because from that moment onwards a different time path was opened (or closed).

Albert Einstein died in 1955, in hospital, aged 76 in the United States. He had pretty much thought about everything he could and discovered everything he could. He was still not conformed with the way the new world he had found was working. There were a few pieces missing. 52 years before, he lived and worked for a while in Bern, Switzerland. If one morning, on his way to work, sometime in 1904, he had slipped, and fallen and his skull got crushed by a fast passing heavy horse drawn cart, we can surely know that the world we are living in today would be completely different. We know the world without Pierre Curie; a world without Einstein is literally incomprehensible. It is also terrifying.

We can argue that someone else would have discovered what he did, sooner or later. The answer is... no! and that leads to the way we are progressing today on our investigations. There are theories of multiple worlds, multiple flows of time, a planet Earth with Pierre Curie alive after 19 April 1906 and Einstein dead in 1904. Because the word "science" permeates our entire minds these entire scenarios are sold to us as "Science Fiction". They aren't... they are just Fiction! They have no application whatsoever to our life and universe, in the same way an iPhone5 is a useless gadget for a tribe in the Amazon forest (you need at least 2 to start with!). Recently on a meeting, with around 15 people a question was asked "If you were landed on a desert island which object would you bring with you?"... the answer of 14 people... "My iPhone!!" without even realising that they could not call anyone and after 24 hours, after the battery went flat, it would be of less use than any stone or piece of wood you could find on the shore. I would definitely bring... a Swiss Army Knife! 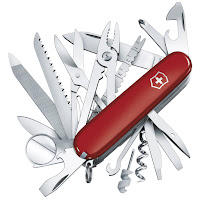 Arthur C. Clarke's quote at the top of this page sums up how we should think. If we are alone it means that we have no one to answer to, but we also have to sort ourselves on our own, to think for ourselves and explain everything ourselves. If we are not, it means that somewhere else, someone is doing an equivalent job and sooner or later will find us and help us or annihilate us. This is pure psychological transference, the hope that something, somewhere, will sort our shortcomings, very human and very flawed. We are even arrogant to the point of imposing to that alien scenario, the same laws and the same thoughts, as if on Planet Solution, they had their Einsteins and Curies and are just a few more "brains" ahead of us, when they finally visit on Independence Day (which they are not, as in the film, Will Smith always him, beats them in the end, how clever are we?). Wherever they are they will have different mathematics, physics, chemistries... something similar (or very different) to thoughts. Thinking is purely human and I am afraid to tell you, on that front, we are terrifyingly alone. Any other perspective is as flawed as an iPhone on a desert island. We are alone, and regardless of that, we have been doing so well!

There are currently worlds made of almost anything, gas, ice, water, even recently a planet made of diamond and the possibilities are infinite, we would be led to think. Now imagine a world made of Chunky Monkey... nothing could be more human but that is an impossibility, tasty as it looks, and brings to perspective how many different ways a world can be made of, after all the scientific hype is stripped off.

Astronomers, scientists, physicists tend to build machines to find and replicate the most astounding (or absurd theories) mostly with the thought that "the answer is out there in the stars". I bring bad news to you... it isn't! It is not even "blowin' in the wind", my friend. The answer is inside you as it always have been, as it always will be. Live with it! and if you have a good one, avoid having your skull fractured by a fast passing heavy horse drawn cart.
Labels: Einstein multiple worlds oscillation Pierre Curie piezo-electricity radioactivity time